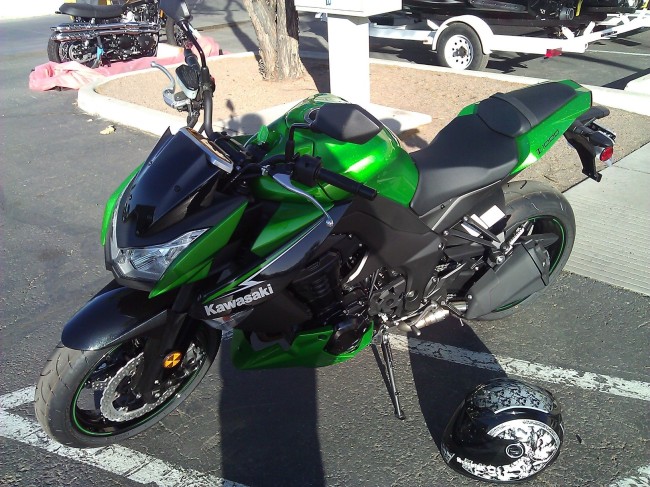 I thought about writing a post about my new ride as soon as I received it, but I realized that I wouldn’t have much to say with only a single ride home from the dealer under my belt. Well, now that I’ve had this motorcycle for over a week and I’ve already put over 400 miles on it, I think I can talk more about it.

I went with the 2013 model over the new 2014 Z1000 for two reasons. First, I wasn’t crazy about the price increase; the 2013 Z’s MSRP was $10,500, while the 2014 is about $2000 more. Since this was last year’s model, I was able to pick it up at a really, really nice price, which was a big bonus. Furthermore, I really don’t like the look of the 2014. I think the gun-metal grey with the green accents just isn’t as striking as the 2013’s full metallic blazed green paint job. Seriously, this thing sparkles in the sunlight. It’s very striking.

My favorite thing about the Z1000 is the upright riding position. I’d already gotten used to sitting upright on a bike since the Ninja 500 has a very upright posture considering its sport bike class. I’ve been on a few other sport bikes with more aggressive, over-the-tank postures and I didn’t care for it. The Z’s seat is really comfortable and it’s nice to sit upright on the thing. It certainly makes tooling around town more comfortable.

The puny windshield means that the wind above about 80 mph gets pretty intense. To be honest, I didn’t realize that the little windshield on the Ninja 500 was doing that much to deflect wind, but the difference is noticeable. I don’t mind the wind, honestly, although it’s a bit of an upper arm workout to hold on at speed, it’s not unbearable. Also, it really adds to the feeling of going Warp Nine when you’re really moving.

Really, I love everything about this bike. Whenever I think about it or someone asks me about my new ride, I get an absolutely ridiculous grin on my face. Riders will often talk about “smiles per mile” as a metric for value when it comes to their rides. In that regard, I think I’m getting my money’s worth, many times over.