This post is being typed in offline mode. It’s Sunday, February 9. I’m sitting on a cold bench in a little campsite just outside of Payton, Arizona. There’s a fire going beside me and the sun is setting; already, the light has gone from “hey, it’s getting dark” to “the only light source is your laptop!”

Hilariously, although I don’t have Internet access out here, I do have three bars and my 3G connection on my phone. This is an unusual luxury for me since normally I tend to operate in areas where the cell coverage is best defined as “hell, no.” We’re not really in the wilderness here, though. The main road into town is about twenty feet from my tent and there’s a Wal-mart less than two miles from here. I know it’s two miles because we stopped there to get those enviro-logs for the campfire.

Like I said, this is a little bit different than what I’m used to. Having a laptop along is another difference, if you were wondering. Fortunately, the laptop is running on battery power. If I was able to plug this thing in, I think that’s the point in which I’d call it quits and just go stay at the nearby best Western.

My phone insists that the temperature is still 57 degrees. It certainly doesn’t feel like 57 degrees at this point. I can see my breath when I exhale and I’m wearing all my layers. The forecast calls for 37 degrees as the low tonight. That will be fun. I’m not overly worried; I’ve done winter camping before, with varying degrees of success. My sleeping bag is rated to 10 degrees. I’ll be fine.

A coyote just howled from somewhere off to my right. Pretty cool.

Does it sound like I’m miserable? That I’m questioning why I’m sitting here in the dark, illuminated only by the glow of a laptop screen, with a Best Western a scant two miles down the road? I’m not miserable. The truth is, I love this stuff.

I love being outside. I love the funny little ways that nature and technology intersect and dance around each other like middle schoolers at the spring dance. No wireless, no electricity, but you still have Internet access! And you have coyotes. The park bulletin board said there were bears in the area. Bears tend to not make much noise, though.

All I really want is for my phone to admit that it’s not the brisk 59 degrees that it currently claims. It’s also not “mostly sunny,” since the sun has already gone down in this part of the world.

In some ways, camping so close to a town is an unusual experience for me. I’m virtually always either backpacking to some remote destination in the mountains or camping in some site that’s three hours away from a town. Having civilization nearby is strange. I’m not sure if it’s comforting to have that as an escape route (if the camping is miserable, there’s a hotel nearby!) or ends up making me feel more forlorn. Hard to say.

I can’t say I’ll post this when I get back to civilization, since we haven’t really left. It would be more accurate to say that I’ll post when I have an Internet connection again. It’s funny; compared to the shoddy WiFi we had at last night’s cheap motel, I think I prefer having no internet access at all. Because at least then, it doesn’t get my hopes up before half loading a page and then crashing. Maybe not, though. We’ll see how I feel when I’m bored in my tent in a few hours and I can’t get Facebook to load.

Oh wait, my smartphone still works. I think I’m going to be fine.

Signing off now from the not-so-wild wilderness.

It’s been quiet on the blog for the past few days. There is a reason for this silence. This past weekend, I went backpacking in the Rincon Mountains with a couple of friends. Now, I’m a pretty experienced backpacker (in my opinion, at least), if not an avid backpacker, since I usually only make it out a couple of times each year. This is important background information.

I’ve been the Rincon Mountains once before and it wasn’t the best experience. At the time, I chalked it up to relative inexperience. I hadn’t been backpacking for several years and during those previous trips, I was always a follower. Everybody I went with had the necessary equipment. All that was really expected of me was that I show up and be able to carry my gear.

My first backpacking trip to the Rincons was difficult for a couple of reasons. First, I lacked some very important gear and second, I grossly miscalculated the water situation and ended up taking three gallons with me for the trip. You can Google the weight of that much water if you didn’t do the math in your head. Now add that number to the weight of a typical pack and you can see why this first venture was doomed before it even started. Perhaps doomed is the wrong word; we did survive the trip, after all.

It’s been a few years since that first effort and I’d completed many more backpacking trips since. I was familiar with my equipment and my needs. I felt comfortable trying out new bits of gear to see what worked. And since I’d been to the Rincons before, I knew the area and what to expect. These were all factors that I felt would guarantee a good trip and if we’re willing to redefine what makes a “good trip,” I suppose I could call it that.

There are two kinds of backpacking trips, in my experience. There are the ones that resemble a nature walk. Your mileage isn’t terribly high or the terrain isn’t terribly rough or both. You don’t really have to push yourself; it’s more about you and nature than any feat of physical endurance.

Then there are the other backpacking trips. The one that seems to be uphill the entire way. The one that burns your leg muscles until they feel like corded steel for days afterwards. The ones that aren’t as comfortable or relaxing as the nature walks, but they’re also the ones that, when it’s over, you can look back on your trip and say, “damn, I really achieved something there.”

This return trip to the Rincons was an achievement trip.

It started out well enough. We got an early start and the weather seemed cool enough. The problems didn’t develop until we were well underway.

1st problem: half my water supply leaked out in the first few hours.

I’d planned on bringing 6 liters of water for that day, with a resupply at the camp site. So imagine my surprise when I found that my 3 liter Osprey was already empty after only a few hours. Maybe I’d been drinking more than I realized? It wasn’t until I saw the puddle collecting in the bottom of my pack that I realized I had a major leak. That was bad. Now, instead of having six liters of water with me, I had three. Not good.

2nd problem: the “mountain spring” did not live up to its name.

This is a mountain spring.

This is not a mountain spring. 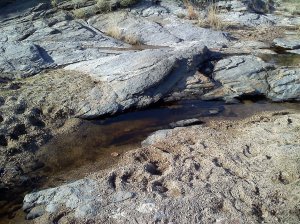 Care to guess which one we drank from?

Fortunately, my water filter did its job well enough and prevented horrible giardia infections. Still, it was pretty gross to expect the flowing stream that I’d encountered on my previous hike and be confronted with a stagnant puddle that challenged me to relive all the best Survivorman episodes I’d ever watched. Even when I resupplied our water, I was still down to 50% of my intended carrying capacity, which meant I was running on empty almost immediately on the second day.

Anyway, this all added up to the fact that water was a huge issue for me during the entire trip and as a result, I was rocking a pretty good case of heat exhaustion and dehydration by the end of the trip, which contributed to my overall bleak mood. I’m glad that we toughed out the trip and I did have a good time. But it was more a result from what I achieved and was subjected to, rather than the aforementioned nature walk.

I’d be willing to tackle the Rincons again; I’ve yet to make it beyond the first camp and I want to see what else is out there. I have a feeling that there’s some pretty beautiful scenery hidden beyond its craggy borders. But for the meantime, I think the next trip will be something nice and restorative at good old Aravaipa Canyon.